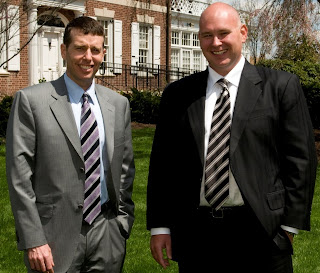 While their political opinions may differ, University of Delaware alumni David Plouffe and Steve Schmidt, the two men who helped run the opposing campaigns for the 2008 presidential election, agree that President Barack Obama was a once-in-a-generation candidate and that young people have become an important part of the American political process.

Schmidt, who led the Republican campaign of U.S. Sen. John McCain, and Plouffe, who led the Democratic campaign of Obama, discussed their experiences with candor and humor before an audience of about 500 people on Thursday, April 23, in Clayton Hall.

The College Democrats at the University of Delaware became a chartered UD resident student organization in 1978; since ratifying our original constitution, it has been amended once–in 1984. Our current constitution is faded and outdated. It’s tough to read and generally smells old and weird.

Join the College Democrats as we chart a new direction for next year and beyond. Next Thursday we will hold a constitution draft meeting where we lay out our proposed new constitution. 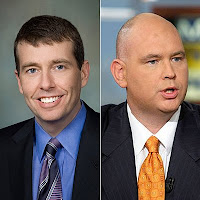 12:14 p.m., April 13, 2009—-Two University of Delaware alums who played central roles in the 2008 presidential election – David Plouffe and Steve Schmidt – will be featured in a special program titled “A Conversation at the Epicenter of Politics: The Election and the First 100 Days” at 4 p.m., Thursday, April 23, in Clayton Hall on the UD campus in Newark.
Plouffe was a key leader in the Democratic campaign of President Barack Obama and Schmidt was a senior adviser to Republican candidate John McCain.
This will be the first time the two men have been together on the same stage since the historic presidential election, which also saw the election of UD alumnus Joseph R. Biden Jr. as vice president.
Both were heralded for their efforts in the press during the campaign. The Los Angeles Times said Plouffe displays “audacity” and “a talent for devising campaign strategy, staying with it under fire and doing what it [takes] to win.” Schmidt, according to the Wall Street Journal, was nicknamed “Sgt. Schmidt” for his formula for success, which was described as “a tightly controlled message delivered repeatedly and with almost military-like precision.”
The University of Delaware connections did not go unnoticed in the national press, and Bloomberg news service called UD the “epicenter” of the 2008 presidential race. “The academic epicenter of this year’s presidential election isn’t, as in some years past, Harvard or Yale. It’s located between Baltimore and Philadelphia at the University of Delaware,” wrote reporter Nicholas Johnston.
The April 23 session will be moderated by Ralph Begleiter, Edward and Elizabeth Goodman Rosenberg Professor of Communication and Distinguished Journalist in Residence at UD. Plouffe and Schmidt will be welcomed back to campus by UD President Patrick Harker.
The event is free and open to the public, and a reception will follow the presentation in the Clayton Hall lobby.
Schmidt attended the University from 1988 to 1993 and Plouffe attended UD from fall 1985 through fall 1988, both as political science majors.