Mark Lynas spoke about GMOs and how his stance on the controversial topic has changed completely as he actually educated himself. Instead of just summarizing what he shared, I’d like to talk a little bit about the history of GMOs. Many people support the anti-GMO campaign or trash talk this technology without even realizing that they make food choices including GM products.

In 1973 the first genetically modified bacteria were successfully achieved. Since then GMO development has been refined, advanced, and developed to the point where the products they produced are commercially available to the consumer. 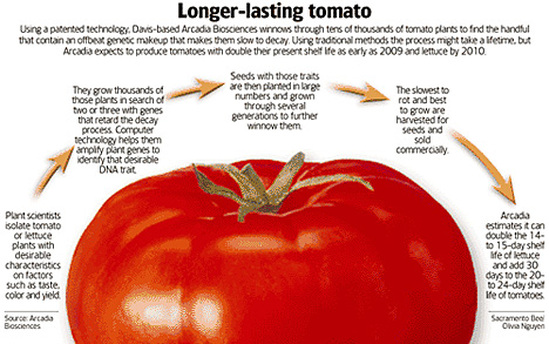 In 1994, the Flavr Savr Tomato was approved by the FDA for human consumption and remained on the market for three years. Although it was taken off shelves in 1997 because of its bland taste, it was still a huge step in biotech history. This was just the beginning for commercialized GM products, and the fact that it was on the market and consumers bought it, helps establish a reputation for GM foods in the controversial market we have today.

Personally, I think genetic modification of plants is necessary to increase production enough to meet the world’s growing needs. The only part about genetic engineering that I would like to learn more about before feeling more comfortable is what we’re doing with genetically modified animals for production. From the research I’ve read, I’m not necessarily convinced on the idea ethically, and from a nutritional standpoint. For example, I choose wild caught salmon over farmed salmon because I don’t want the salmon I eat to have been fed pigmented corn-based feed. Also, aquaculture as a whole is very damaging to the marine environment.