If you are a sports fan, like me, March is not just another month in your calendar. No, March means March Madness. The month to watch the most fun basketball games. Last year, in 2016, a total of 74,340 fans attended the final game, while 3.4 million people watched live streams through the app, and 22.3 million people via Turner Sports’ at the end of the game. An important feature of the game that I, like many others probably, have never really thought about is the squeaky noise of the shoes on the court, “the unofficial soundtrack of basketball”. It is an important feature to both the players and the fans. The New York Times wrote an article about how this phenomenon can be explained by shoe designers, rubber scientists, mechanical engineers and a biologist. 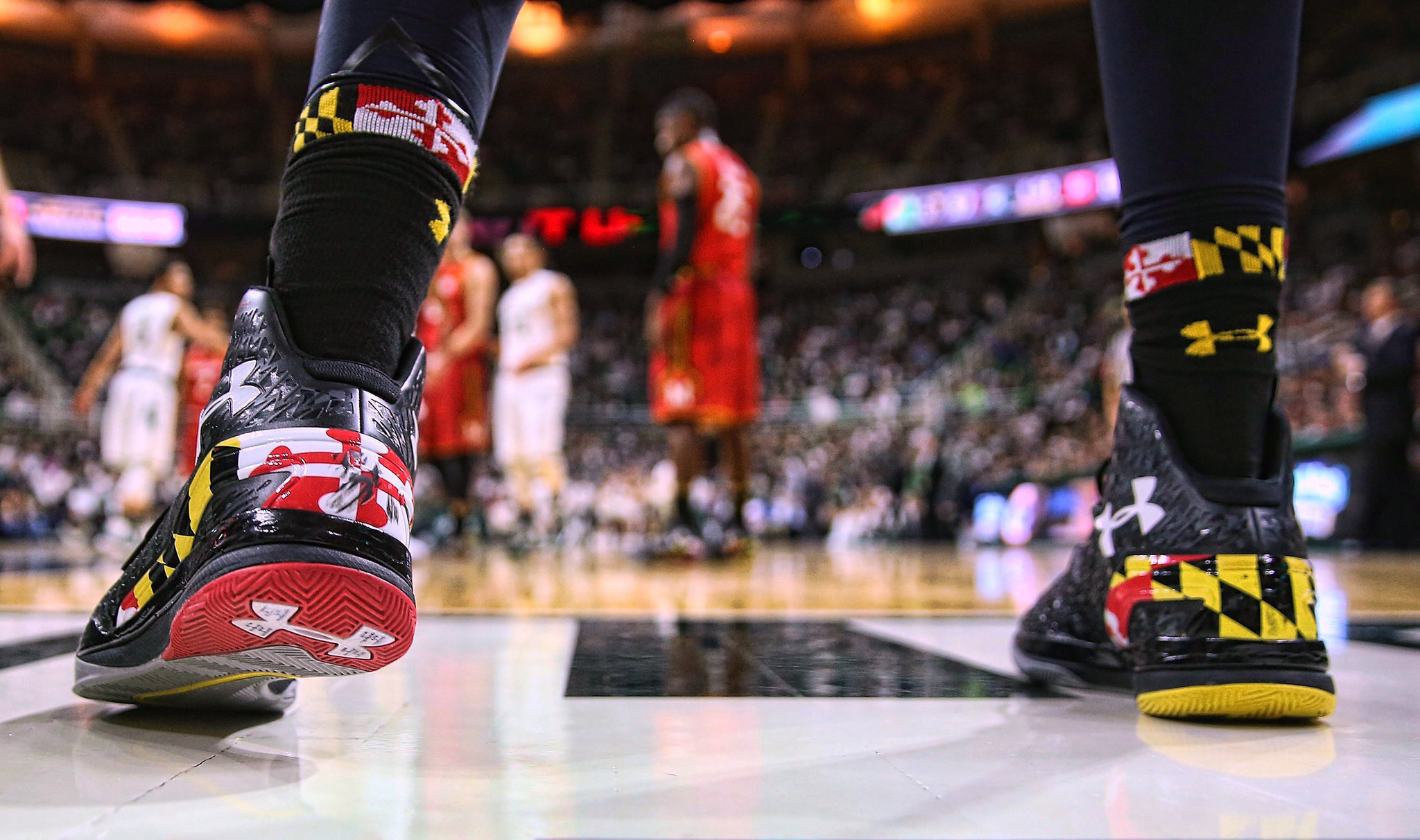 A detailed look at the Under Armour basketball shoe worn by Maryland
in a game at Michigan State in 2014.
Credit Leon Halip/Getty Images
From: New York Times, March 17, 2017

Sheila Patek, a biologist at Duke University, found that her discovery on the defensive mechanism of spiny lobsters can be related to the squeaky noise from basketball shoes. These lobsters rub a smooth, rubbery part of their antenna against a smooth, hard part of their head, creating a squawk. Contact between these types of surfaces is similar with the basketball sole and court, as Martyn Shorten, owner of a biomechanics consulting firm in Portland, Ore., found. He is one of the few people that has researched the squawk specific to basketball shoes. With his research partner Xia Xi, he concluded that the herringbone structures of the shoe outsole are induced to vibrate at their low-order natural frequencies by stick-slip contact with the surface. These vibrations turn into the well-known high-pitched squeaks. Leo Chang, senior design director at Nike, says that “the squeak is reassurance to a lot of players. They listen for it. It gives them that audio sense of reassurance that they’re sticking.” Judit Puskas, a chemical engineering professor at the University of Akron, explains the rubber technology, as that is what the sole is made of. In designing, for example a basketball shoe, you need to find the right balance between the ability of the rubber material to “stick”, “slip”, and wear. The rubber sole needs to allow a player to stop and turn, a too sticky sole creates a too high impact on the body. Greg McDaniel, an assistant professor of mechanical engineering at Boston University, explains how the squeaky noise is created under a rubber sole. Air gets compressed in the tiny, vibrating spaces in the rubber sole, which sucks in neighboring air. This causes the air to expand, which leads to compression of neighboring air. As rubber moves, it compresses air at a frequency that is the same as the vibrations. He found that different herringbone designs lead to high-pitch squeaks of frequencies between 5-6 kilohertz, which can be carried through an arena very well. That is why a basketball game will never be silenced.

This article immediately made me think of one of the discussions from The Sports Gene, when they talk about how technology has impacted performance. I really wonder how much the design of the basketball shoe has impacted the performance of the players. The chapter of The Vitruvian NBA Player mentions how the height of players has influenced the sport so much in terms of recruiting, but maybe the development of the basketball shoe has also contributed to how quickly players can turn, and how high they can jump? In general I thought this article related to the course as it discussed the design of a piece of equipment, the shoe, that provides exercise.

I found it very interesting that people took the time and effort to research the squeaky noises on the basketball court. The findings from Martyn Shorten and Xia Xi on the different frequencies of squeaky noise caused by different shoes were pretty specific. I also found it interesting that people from so many different disciplines contributed to researching this topic. Like mentioned earlier, it was shoe designers, rubber scientists, mechanical engineers and a biologist whose knowledge was useful. Who would ever think to relate a spiny lobster to a basketball shoe? I also think it is interesting how the design of the basketball shoe sole has an impact in many different aspects. Not only does the rubber design of the sole matter for friction between the shoe and the court which impact the forces felt on their bodies when they are turning, it also plays a role in the mental game. It gives the players confidence in their moves, as they said it re-insures that sticking feeling for them, and I think that potentially even influences risk of injury. I wonder if a basketball player would move differently when you would give him a non-squeaky shoe, and if that would put him at higher risk for injury.

2 thoughts on “The Unofficial Soundtrack of Basketball”