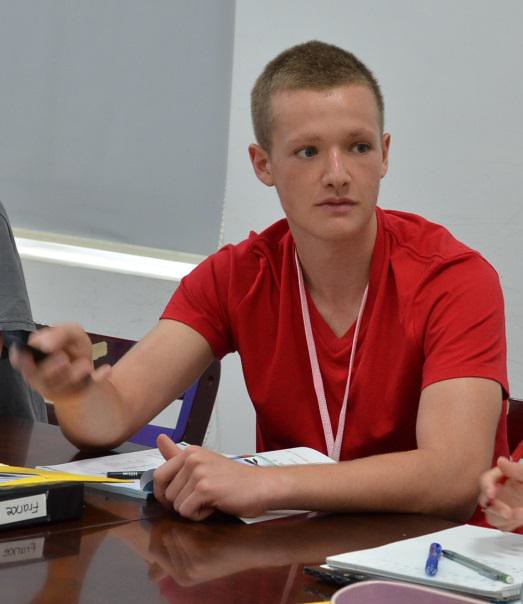 You know how some movies start out amazing and only get better?  That’s how the University of Delaware’s 2015 NSLI-Y Summer Institute of Chinese Language and Culture is turning out.  Our adventures began at Pre-departure Orientation in Newark, New Jersey.

Breakfast began at 8:00 am.  It was a nice time to start getting to know our classmates for the next 6 weeks.  After breakfast, the program director, Dr Jianguo Chen gave welcome remarks and an introduction to the program.   Dr Chen is the director of the Confucius Institute at the University of Delaware.  He has led this program since it began in 2007.  With every slide that Dr Chen showed, my excitement grew.  We have so much in store for us this summer.

Next in store was a getting to know each other.  Our whole group is divided into five subgroups of 5.  We broke into groups, and each was assigned an animal mascot, lion, tiger, koala, panda, and swan.  The people in the  groups lined up, and each person was given the task of introducing the person next to him to the group.

After this, we watched a presentation by Dr Carol Radomski of the US Department of State.  It highlighted the  sense of responsibility that we have as exchange students.  We are, in a way, ambassadors.  Many Chinese people have not seen an American before, and they may, therefore, think that all Americans act as we do.  If we act well, it will give people a good impression of Americans and America, and not doing so will do the opposite.

Next we had a short break followed by a discussion of language immersion led by Dr Maria Tu,                       the co-director of our program.  She told us about what our academic activities will be.  We will have about 3 hours of classroom work in each of our respective classes along with an hour and a half tutoring session with  a Xiamen University student.  She also told us about the Strive for Excellence program.  Strive for Excellence is a point system designed to stimulate and quantify student activity.  Students start out with 70 points and win points by doing things like helping teachers, participating actively in class, being attentive during cultural  excursions, showing good leadership, and exhibiting qualities of that sort.  They lose points by doing the  opposite. At the end of our six weeks, the group and student with the most points will be given a large award.

Next, Kuangbin Fan, the Assistant Program Coordinator covered some administrative details and the program  logistic issues. Next was lunch.  It was also a good time for socializing, but no one had his mind solely on hanging out because next came the language placement test.In the NSLI-Y application, each student assessed his or her level of Chinese proficiency.

After being accepted, each student with prior knowledge of Chinese also completed an Oral Proficiency Interview.With this information, Dr Tu tentatively assigned assigned each student to Intermediate I, Intermediate II, or Advanced.  This test was to be the final determination of class assignments.  The test  consisted of 2 parts: a test made for the assigned level, and a harder test for the entire group.  After completing  them, some students shifted classes up or down, but most remained at their assigned levels.

After this, Dr Chen gave everyone advice on cross-cultural communication.  He gave us examples of how  students had done a good job and a bad job of this in the past. Next came a short break after which Dr Chen  discussed  the expectation of participants.  We went through the program Student Guidelines and rules line  by line,  but it was far from tedious.  Dr Chen had a student begin reading, then stopped him or her to discuss  the reason for the rule.  Each rule was made in response to a past happening.  Whenever there has been a problem in this program, a rule has been made to prevent it from ever happening again.

After a short Q and A session, students ate dinner, hung out together, and made sure they were packed. Excitement kept building as the departure time neared.  It was hard to believe that the next morning, we would leave for the other side of the world: the Middle Kingdom.