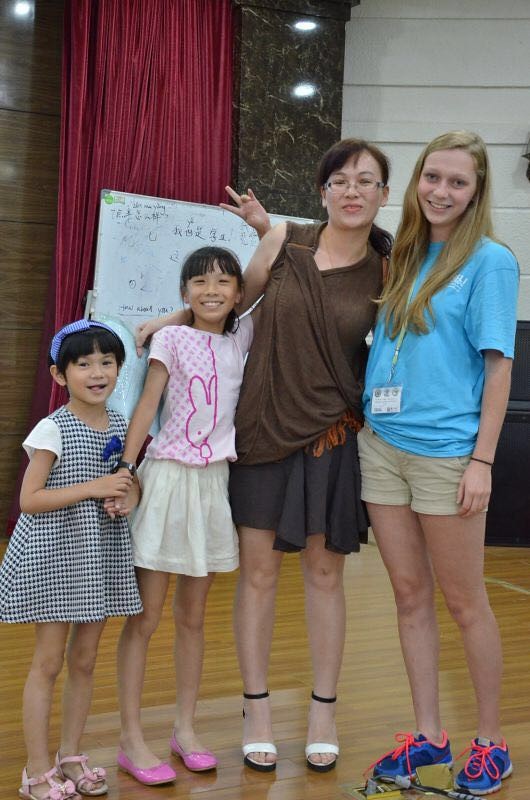 After a week in homestay, I have become accustomed to my family’s routine. When I joined this program, I assumed that I would only have one sibling, but I soon discovered that I had been lucky enough to join a family that had two adorable (evidence below) girls! The eldest has a lot of patience with my inability to understand her a good portion of the time. My host parents have been unbelievably kind. I am sure feeding a vegetarian has not been the most convenient for them, but they have excelled at preparing dishes.

At first, awkward lulls in conversation occurred frequently: I did not know what to say or what to ask – even if I could use English. However, conversation has become less awkward, excluding the times when I cannot understand what they say, and we have had many interesting discussions. They told me of their interest in moving to California and asked many questions about America and American schools. Although I certainly spoke in choppy sentences with horrendous grammar, they understood my meaning. This has forced me to think of creative ways to explain what I do not understand which has undoubtedly improved my Charade skills. On the way to school, I often ask my dad how to say something I see. After saying the Chinese word, he asks me how to say it in English. Together we have improved our vocabulary.

While I frequently talked to my parents and older sister, the younger sister took a while to warm up to me. Although she frequently talked with her sister, she rarely spoke directly to me. However, one day while beginning my homework in my bedroom, my youngest sister peeked around the corner into my room. She hesitated outside, until I told her to come sit on my bed. She seemed upset, but would not explain why. I asked her if she wanted to hear some of the Chinese story I had to read for homework. After a while, she still seemed upset, so I asked her if she wished to draw. A few stars in she returned to her cheerful self and proceeded to introduce me to her many stuffed animals – one featured in the picture above. Later, she showed me a card she had received for her birthday. I think we bonded over our ability to read the characters for happy birthday, and inability to read the rest of the card.

Although I learned in the most uncomfortable way the meaning of 蚊子 wen2 zi (mosquito), I truly wish I could stay in this home longer.